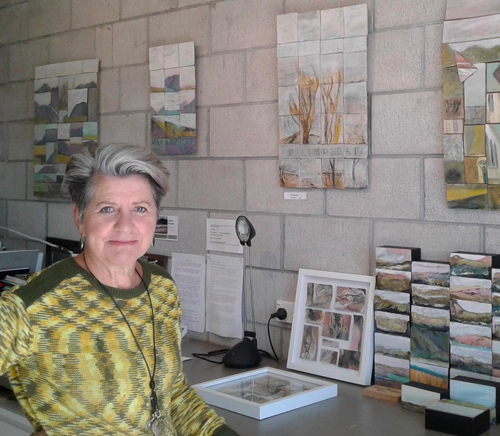 Barbara Robinson was born in Christchurch in 1950 and taught visual art to thousands of students from Year 1 to Year 13. During her 35 years of teaching she delved into almost every art media, style and genre and exposed her students to a very richly tactile form of expression. Time constraints meant her creativity was limited to small series of work, annual group exhibitions and local art sales.

Living high on the hill overlooking the city and surrounding hills gave Barbara a panoramic view of the earthquake devastation to the beloved city and environs. What had provided rich inspiration then wrought sadness and so a sea change was sought?

Waiheke Island off Auckland now provides a whole new rich environment for her practice. After the earthquakes, she revisited an idea, she had many years ago,of upcycling her Father’s landscape oil paintings on boards. Gordon Pettigrew, was a prolific artist between 1972-1988. After his death 20 years ago, he left a huge collection of unfinished work, which begged to be seen again, albeit in a more contemporary layout, with colour and textural alterations.

Using a combination of his works, a fresh layer of oil paint is applied, sanded back, cut, arranged and assembled, bringing new life to his brush strokes andpalette knife marks. Each work evokes a sense of a landscape, without describing the exact location, leaving the viewer to draw their own response.

More recently Barbara has diversified into recontextualising found materials as a ground for her work which addresses environmental and proprietary challenges to the land, sea and sky both locally and in her former province, Canterbury.